Philadelphia — In Philadelphia, 60 percent of all older adults report eating two or less servings of fresh fruits and vegetables per day, and 72 percent are obese or overweight, according to the Public Health Management Corporation.  Many of these individuals are low-income and lack ready access to fresh produce in their neighborhoods. They may also have problems shopping and preparing meals due to lack of transportation and physical frailty. In addition, they may lack knowledge of proper nutrition. GenPhilly will hold a free forum on Wednesday, March 20 to discuss ways to increase food access and nutrition and highlight innovative food access programs around the country which might be replicated in Philadelphia.  The event will take place at the Jewish Federation of Greater Philadelphia, 2100 Arch Street in Center City, from 8:30 a.m. to 12 p.m. RSVP required. 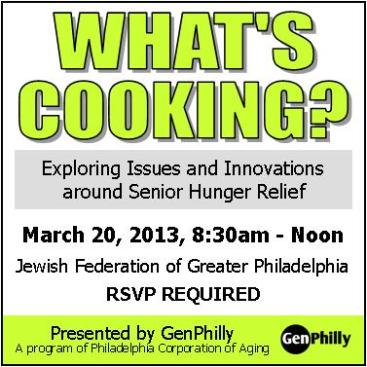 Elder abuse comes in many forms. It is recognized by experts as a public health crisis for which there are no socio-economic borders. Millions of older Americans are abused, neglected, or exploited each year, and estimates suggest that a large majority of these cases go unreported.

To shed light on this problem, June 15th has been designated as World Elder Abuse Awareness Day, with 2012 marking the 7th anniversary of World Day. 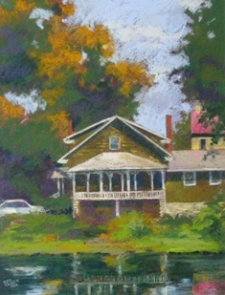 Asked how long he’s been painting, artist Benjamin (Ben) Cohen, 88, replies, “I guess forever.” Cohen’s painting, “Lakeside,” an idyllic scene of a lakeside house with autumnal trees in the background, is the signature artwork for Philadelphia Corporation for Aging’s (PCA) 10th annual senior arts festival “Celebrate Arts and Aging” http://www.phillyfunguide.com/page/Celebrate.   It will be on exhibit during May at Independence Visitor Center in the city’s historic district and featured on posters, mailings, and electronic media publicizing the citywide celebration.

“My philosophy is that art should be uplifting and thought-provoking and may allow for quite a smile.  There is enough horror and aggravation going on nowadays. If I can make someone smile, I want to do that,” the artist says.

“Lakeside” was inspired by the one of the many outings Cohen has enjoyed with the Rancocas Valley Plein Air painters, a group of more than 30 local artists, who visit a different outdoor site to paint each week, weather permitting. “I bring my backpack with a bunch of pastels and sit and relax and paint,” Cohen explains.”People will see me and ask: ‘Are you an artist?’”

Cohen’s talent was noticed early on. The son of an iceman and a homemaker, he grew up in New York City’s Lower East Side, and attended the Henry Street Settlement http://www.henrystreet.org/, a social service agency there dedicated to “opening the doors of opportunity” to residents in the community through social services, arts, and health care programs. “They were very interested in keeping kids on the right path,” he remembers. “They thought I had talent and sent me to a life-study art class. But at nine years old, I was too embarrassed to look at the [nude] model.” 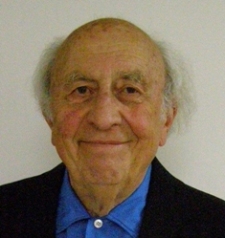 Cohen later studied at Pratt Institute in Brooklyn on the GI bill, after serving in the U.S. army in World War II.

He fought in many of the war’s most famous battles, including the Battle of the Bulge and the Battle of Metz in France that followed the Normandy landings. Earlier this spring, during a special ceremony at the French consulate in New York City, he was one of 18 U.S. veterans presented with the Legion of Honor Chevalier for their services in the liberation of France during World War II.

“War taught me to face reality,” Cohen reflects. “I try to follow my instincts. When I do something, I don’t look back.” That goes for painting too, he says. “When I paint a nose, it’s really a nose, not just a metaphor or a philosophical statement.”

Cohen graduated Pratt with a degree in industrial design and spent 50 years as a commercial artist, designing everything from toys and sweaters to catalogues and displays. It often meant working around the clock. While those demands left little time for fine art pursuits, he squeezed in what time he could to paint in the pastel medium he favors.

After such a demanding work schedule, “I was a little leery about retiring,” he admits of that decision 10 years ago. “I thought, ‘I’ll go crazy. What will I do?’”

The answer came quickly enough. Tuesdays are spent with his fellow plein air painters. On Thursdays, he attends a class at the Philadelphia Sketch Club, where he has helped to organize exhibitions. He taught at the Philadelphia Art Alliance and Fleisher Art Memorial and currently teaches at the Willingboro Art Alliance near his Cinnaminson, New Jersey home. Most of all, life these days is centered on his home studio, “where I still work around the clock. It’s still a crazy, busy schedule.” His expressive landscapes and figure paintings have found homes in many private, corporate and public collections.

In September, the Home Fine Art Gallery in Mt. Holly, New Jersey, will open an exhibition of his work entitled “The Flip Side.” One of these artworks features Santa Claus sitting in front of a window and eyeing the raging snow and ice storm outside. “I titled it ‘I Ain’t Going Out in That,’” the artist says with a laugh.

Cohen now manages to fit in a few hobbies, including gardening. “It’s one of my passions because it’s so relaxing,” he says. “I can dig in the garden and forget the world around me. Art, when it’s on a serious level, is not overly relaxing because you are never satisfied with what you do.”

“Lakeside” will be on exhibit through May at Independence Visitor Center, 1 Independence Mall West, in Philadelphia.

For more information on this exhibit and other PCA “Celebrate Arts and Aging” exhibits and cultural opportunities this month, visit www.phillyfunguide.com/celebrate.

Call for Artists 55+ for PCA’s Celebrate Arts and Aging

Submissions Sought from Artists 55+ for

Artists age 55 and over are invited to submit artwork for exhibit as part of the 2012 “Celebrate Arts and Aging” festivities during Older Americans Month in May. Presented by Philadelphia Corporation for Aging, and supported in part by PECO, “Celebrate Arts and Aging” highlights older adults’ artistic talents and creativity with events held throughout the city during May. In addition, it offers older adults a host of opportunities to connect to arts activities that month, including discounts for many arts performances, museums and other cultural venues.

This is the 10th year for the celebration. Senior artwork will be exhibited at four sites this year, including Center on the Hill…the place for active adults in Chestnut Hill; the Klein JCC in Northeast Philadelphia; Independence Visitors Center in Old City; and Philadelphia Senior Center in Center City.

Photo or slides of artwork, accompanied by an art submission form, should be sent to Amanda Buonomo, PCA special events manager, at PCA, 642 North Broad St., Phila., PA 19130 by Wednesday, March 28. Artwork must have been created during the past three years. There is a limit of one submission per applicant. For more information on art submission criteria and an application to exhibit, visit www.pcaCares.org/SeniorArt, call 215-765- 9000, ext. 5052, or email abuonomo@pcaphl.org.

It’s been a pretty mild winter so far, and this week’s forecasts call for more of the same. But when the snow does fall, it’s harder for some to deal with it than others.

Kate Clark, a planner with the Philadelphia Corporation for Aging, is also a chairwoman of GenPhilly. That’s Generation Appreciation, an organization that promotes interaction between young and old.

“When I’m walking down the street and I see a home that’s not shoveled, sometimes I think, ‘Oh, wow, I wonder if that’s a senior that can’t get out and shovel,'” said Clark.

Lesbian, gay, bisexual and transgender (LGBT) older adults often experience unique barriers to community resources that make it more difficult for them to access health resources and to age in place. PHMC is conducting a survey to learn more about LGBT seniors, their health status, and access to services. The survey takes a broad view of health, including health behaviors, emotional health, and connections to other people. It also seeks to gain feedback from LGBT individuals who are thriving, and how success can inform “age-friendly” policy and practices that are also LGBT-friendly. This survey is self-administered and can be completed by mail or online. PHMC is also looking for locations where a facilitator can administer the survey onsite. Locations have been identified in Center City. Additional sites are needed, especially in Germantown, Southwest Philadelphia, and Northeast Philadelphia. Participants are asked to provide space for a few hours and to promote the survey in a newsletter announcement. To participate or for more information, contact Heather Batson at 267-985-6237 or by e-mail to heather@phmc.org

Of the nation’s 10 biggest cities, only Philadelphia has no taxicab that can give a lift to a person who uses a power chair.

Henry Gooden’s power chair died the other day on South 16th Street, about a half-mile short of his apartment in the Scottish Rite Towers.

He’d gone to Holt’s for a blend of pipe and cigarette tobacco that lets him roll his own smokes and save money on Newports.

When his chair ran out of juice, Gooden was outside the 274 Apartments. He figured he was stuck…

Then a passing cabbie told the men of a new player in town, a powder-blue and maroon Freedom Cab van, specially equipped for wheelchairs.

A few minutes later, Billy Goodman pulled up to the curb. In the front passenger seat rode Everett Abitbol, co-owner of the cab company. They opened the back gate, fastened two hooks to the front of Gooden’s chair, hit a switch, and drew him into the back of a new Toyota Sienna.

Are you an emerging professional who works with older adults in some capacity? Are you looking to meet other like-minded professionals? Visit our GenPhilly Network page for more information about how to join the movement!

Sign up for our free event newsletter! Receive information about upcoming our events and those we support.

A program of Philadelphia Corporation for Aging.